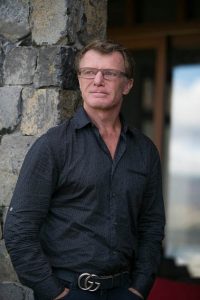 Thomas Budd was in the investment industry from 1981 to 2009 where he held various investment banking roles.  Mr. Budd’s last position was when he joined the partnership of Griffiths McBurney & Partners as President and took the Company public to form GMP Securities which is listed on the Toronto Stock Exchange.

During his career Mr. Budd was involved in over 1000 financial deals, of which he was lead underwriter on over 480 and as lead financial advisor on over 600 mergers, take-overs and restructurings.

Thomas Budd is a well-known community leader, philanthropist and founder of the Thomas Alan Budd Foundation.  Mr. Budd generously supports a variety of charitable organizations predominantly in his community of Kelowna.

Mr. Budd has survived the tragic suicide of both his sons, Dillon and Payton Budd.  His painful loss has been the advent of a new journey and purpose – to share his story, to give people hope, and help get them through the hardest times in their lives by speaking out.   He is an advocate for awareness surrounding mental and emotional health issues and suicide prevention initiatives.

Through the Thomas Alan Budd Foundation, Mr. Budd supports a number of local charitable organizations and initiatives some of which include the BC Cancer Society,  Kelowna General Hospital, BC Children’s Hospital, the Canadian Mental Health Association, Kelowna Community Food Bank, Cops for Kids, Okanagan Boys and Girls Club and the YMCA Strong Kids Campaign.  Mr. Budd is an active participant in many of the charitable events that he supports including the Coldest Night of the Year Walk for Homelessness, Cops for Kids annual ride, the Canadian Mental Health Ride Don’t Hide event and you can always count on his attendance at the Maxine Dehart Drive Through Breakfast and annual KGH Radiothon.  Mr. Budd has helped build playgrounds and supports various sports organizations and athletes.  Mr. Budd has set up a Youth Scholarship Award for the Young Male and Female Volunteer of the Year at the Kelowna Annual Civic Awards.  Starting in 2018 Mr. Budd set up annual scholarships through the Central Okanagan Bursary and Scholarship Society in the names of both his sons Dillon Thomas Budd and Payton Leigh Budd.

Mr. Budd has embraced his community.  He is a leader, a listener and a speaker.  He strives to inspire others to do their best.  He is a passionate sports enthusiast, tennis player and car racer but most of all values the quality time he spends with his family and friends or people in need.  He is a man who chooses to make a difference in our community and around the world.